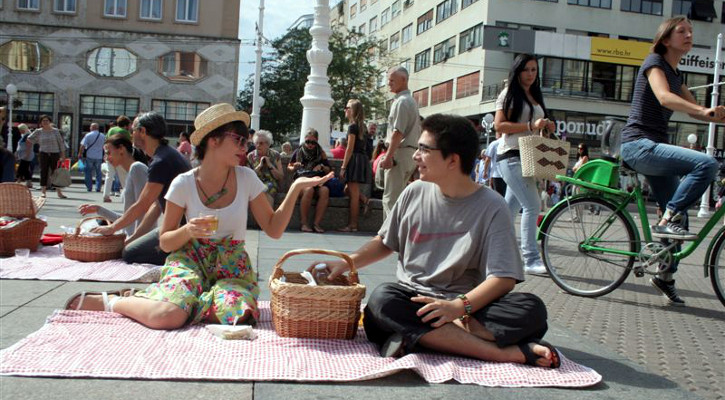 ‘Experts, operators, agriculturers, etc. they are emotionally completely hardened, those who do surgery, who slaughter. But people do not know and must not know this. They must not know because they would even get problems with digesting meat, we would partially be disgusted by animal products. (…). This is one of taboos of mankind – not knowing about the victims we eat.’ – Nikola Viskovic

Veggie Oasis in Zagreb and Rijeka

In order to better stand the summer heat, and also be informed and help animals, we organized Veggie the Oasis for citizens in Zagreb and Rijeka. Visitors of Veggie Oasis were able to get refreshed and enjoy juicy fruit and plant drink smoothies with ice, learn how to make oat milk and get recipes for smoothies, ice creams and other cold vegan desserts.

We announce the 5th ZeGeVege Festival of Sustainable Living, which will as part of the Veganmania take place in Zagreb on Friday, Sep 7 (9 A.M. – 9 P.M.) and Saturday, Sep 8 (9 A.M. – 5 P.M.). The numerous visitors will be welcomed by more than 50 Croatian and foreign exhibitors, attractive performers who will encourage everyone to dance and sing with their cheerful rythms, vegan tastings, various prizes, promotional sales and other educational and fun activities. For more information please check the posts on our web site, zegevege.com and Facebook.

We invite everybody to join our Veggie Challenge which will last from the ZeGeVege Festival Sep 7-8 until World Vegetarian Day Oct 1. You can join us already today and enjoy the good food and even better feeling for doing the best possible thing for yourself and world around you!

The Fitness Bootcamp trainer and hip-hop artist IFEEL who creates music to give his voice to animals joined our campaign for the promotion of a sustainable diet and healthy live posing on ads announcing the ZeGeVege Festival. Dragan Surlan aka IFEEL earned his degree in psychology in the United States and was the first fitness trainer to start Fitness Bootcamp in Croatia.

Picnic On the Main Zagreb Square

As announcement of the ZeGeVege Festival, we organized a picnic on Trg bana Jelacica in Zagreb. Croatian celebrieties Petra Friganovic, Djurdjica Vorkapic, IFEEL and other lovers of tasty veggie food sat on blankets enjoying baskets full of healthy fruit, vegetables, sandwiches and cookies.

On Sept 1 we held in Zagreb a protest against the slaughter of 20,000 dolphins in Japan. Protests took place in 93 cities, including Tokyo for the first time.

Thank you all for following our work and your kind support. We invite all of you who are only starting to learn about our work to check the ways how to help us in the left section of this newsletter. By supporting our work you are helping the animals. Thank you.