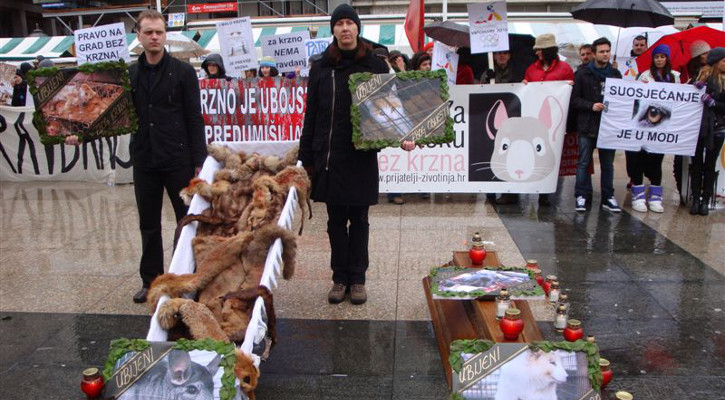 ‘These are revolting and unnecessary experiments. Sadly, we are too familiar with the effects of terrorism. It is perfectly possible to find out things we don’t know without blowing up pigs to find out.’- Norman Baker, the Liberal Democrat MP for Lewes

Tales from the Plate

With the lecture ‘Global Destruction by Fork’ on January 28 in Zagreb’s Cultural Informative Center (KIC) started the lecture series ‘Tales from the Plate’ on ecology and nutrition by Vedran Romac. After the first lecture we invite to the lecture entitled ‘Tales from Your Own Faeces’ which will be held on February 25 at 7 P.M in Zagreb’s KIC, Preradoviceva 5.

In spite of the bad weather around one hundred protesters in the center of Zagreb loudly shouted out against the killing of animals for fur and invited to compassion. On February 20 the protest started at 11 A.M. and lasted two hours. On Zagreb’s main square, during the performance, Croatian celebrities Luka Nizetic, Fani Stipkovic and Sanja Duggan gave their support to the protesters. Photos from the protest can be seen in the photo gallery.

– With organizing a coach from Zagreb we gave support to the colleagues from Animal Friends in Bosnia in Herzegovina on their first big anti-fur demo on January 30. The protest ended with a performance which gave a clear message that the killing of animals for fur is unacceptable.

– We sent a request to all guilds of caterers and tourist workers to influence the improvement of the vegetarian offer in restaurants and hotels on the eve of the oncoming tourist season.

– We sent a demand to the community of Novigrad Podravski in order to achieve a revocation of the decision on mandatory chaining of dogs, which is contradictory to the Animal Protection Act. Also, we warned them about the non-existence of a spay and neuter program, as well as the caring and homing of abandoned animals.

– We reported animal abuse at the Zoological Garden of Zagreb and absence of proper veterinary health care to the Veterinary Inspection in Zagreb, demanding an urgent inspection of all captured animals in Zagreb’s ‘prizoon.’

– At the competition of artworks with the theme stereotypes organized by the association Odo’ ja! an artwork about speciesism by our activist Mariana Cerovecki was presented too. Our activist Marko Djeska won the public prize on the Festival of Croatian Animation Filmfor the film ‘Kolinje’ (Home-Slaughter) – the first animated film of animalistic topics.

– The County Court in Koprivnica, as a court of second instance, rejected the appeal of Antun Brkic on the verdict of the Municipal Criminal Court in Zagreb on October 30, 2008. The court of second instance confirmed the verdict from 2008 explaining that information given by Animal Friends Croatia to the media about the protest in front of Brkic’s apartment because of illegal experiments on beagles at the Faculty of Veterinary Medicine in Zagreb were not rumours but correct and that the citizens were not disturbed.

– On February 19 our Split branch organized a projection of five documentaries about animal rights in the local ‘Info zona’.

– From the news on our web site we invite you to check out the photos from the anti-fur action in Novi Sad, Serbia and anti-fur demo in Osijek, Croatia, sign the new petitionAgainst Equestrian Sport and see the new company on our cruelty-free list – Yves Rocher.

– On March 15, on the International Day of Protest against the Canadian Seal Slaughter we will protest in front of the Canadian Embassy in Zagreb, whilst on March 20 we will mark Meatout. If you would like to be updated about our future activities please check out our Calendar of Activities.

Please help us with your advices, your membership, by volunteering or through your donations. Only together we can continue with our regular activities for animals.

Best regards and until the next reading,