„By eating meat, we contribute to the worsening of climate change, the destruction of our forests, as well as the poisoning of air and water. The simple act of going vegan will make a difference to the well-being of our planet.” – Thich Nhat Hanh

Over 40 celsius! dog’s paws are burning, please adopt them

The campaign to take care of dogs from Žarkovica has been going on for two months. After the decision that more than 260 dogs should be relocated urgently, the State Inspectorate has already extended the deadline once, which expires in a few days. The volunteers expect that the deadline will be extended even further because it is impossible to take care of so many dogs (especially during the summer when animals are increasingly abandoned). Also the shelters are overloaded so we are spreading the word to share their photos or to give them a new home, if possible.


New regulations on breeding of pets

This month, the breeding of pets intended for sale has been newly regulated by the law. The most important novelty is that not only commercial sale, but also any other form of transfer of ownership of a pet, including gifting without commercial benefit is considered a sale. It is also stipulated that all breeders must register without exception. We sent the notification about the rulebook to all veterinary inspectors and local and regional self-government units.

During this summer heat we are offering recipes of delicious and healthy dishes, which will help you to cool down, to enjoy seasonal foods and to feel great because we are doing good, not only for our health but also for animals and the planet.

The veterinary inspection extended the deadline, but only for a month

Since the end of May, there has been an operation to take care of dogs from an unregistered shelter in Žarkovica where they have been kept in unsatisfying conditions. The city of Dubrovnik has received a 15 day notice from the State Inspectorate to urgently take care of stray dogs, however the deadline has been extended for 30 days because the approved shelters do not have enough capacity for the emergency reception of more than 200 dogs. Help by sharing Facebook posts and the adopt-zarkovica.eu website, which has been translated into English and German.


Zoo as a short entertainment, but death and suffering for animals 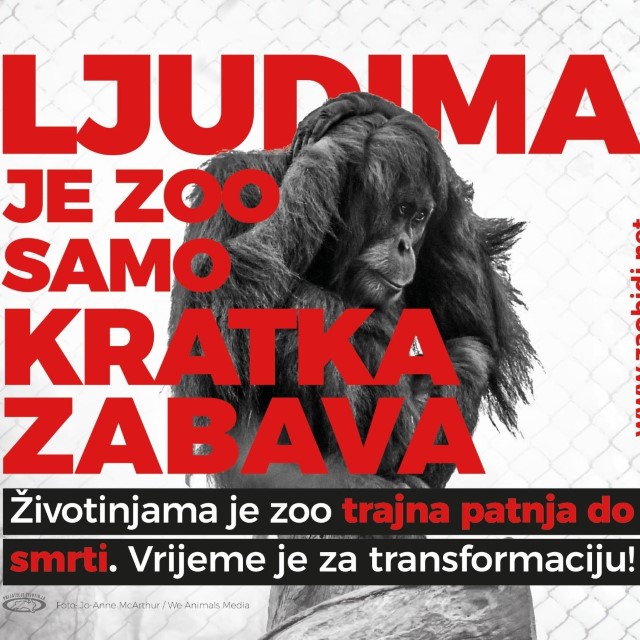 Continuing “Skip the zoo” campaign, we invite the citizens to educate themselves about the harsh reality of zoos. Last year we have appealed to general public to avoid such places. In the month of May, 2022 we have pointed out that we all pay for the suffering of animals in zoos, even if we don’t visit them, since cities spend millions to maintain these animal torture centers.


With spaying against suffering

We have announced that to this date, more than 650 animals have been castrated in the earthquake-affected areas of Sisak-Moslavina County which started in February as a part of free castration of dogs and cats project. This was made possible exclusively by donations from “Astra poslovni inženjering” as well as other companies and citizens amounting in total of HRK 300,000. Thanks to all of them, we got the opportunity to become part of a noble cause that has the ultimate goal of reducing the suffering of animals. Our project is still in motion and the goal is 1000 castrated dogs and cats.

In Zagreb’s Cat caffe we have organized a campaign “Family to the seaside, dog on the street?!” through which we are trying to educate people about responsibilty to our pets, for almost 2 decades. Tarik Filipović, who was this years campaign ambassador, was surrounded by 14 cats that were adopted from the street or from shelters. The cafe workers are constantly educating guests about the importance of castration, proper care and responsible guardianship of cats and dogs throughout the year, including during the holidays.


Sign the petition to sanction abandonment as a criminal offense!

Once again, we appeal to everyone to sign the petition to amend the Penal Code with the aim of treating animal abandonment (an act of animal abuse), inflicting harm and suffering, as a criminal offense. By signing, you will also request increased penalties for the crimes of killing and torturing animals as well as an additional punishment for cases of long-term animal torture.

Plant-based milk day is approaching! We invite all volunteers to partake in a project with the main goal to motivate more caffes and restaurants to include plant based milk in their menus. In particular, we need help with visiting the coffee shops carrying a suitable poster “Plant milk conquers the world” and a liter of “barista” plant milk (we will provide all of the above). If you are in favor, contact us at pz@prijatelji-zivotinja.hr.


Cooperation with the “Be At One” cosmetics

We would like to take this opportunity to introduce you to “Be at one“, a 100 % vegan and cruelty free cosmetics that is dedicated to creating products that do not cause suffering to animals. Up to 5% of their sales in Croatia is donated to our cause so we could put an end to animal testing and the exploitation of innocent beings in the (but not limited to) cosmetics industry. “Be at one” cosmetics is available in Müller stores.