„The biggest challenge in advocating for animal rights is not to get people to see their suffering, but to get them not to turn away from what they have seen.” – Jo-Anne McArthur, photographer

Lifelong captives on posters throughout Croatia

All over Croatia, billboards show messages that connect the unpleasant feeling of helplessness due to the deprived freedom, which we all felt during the lockdown, with the fate of animals in zoos which, unlike us, will never get over that feeling. Billboards with monkeys and lions behind bars, created in collaboration with the Spellcaster agency, leave no one indifferent. We invite everyone to support the “Stay out of the Zoo” campaign by by a donation, or by sharing these posters on social networks.

In Croatia, there are about 20 percent of dogs that are not microchipped or vaccinated

On World Rabies Day, we pointed out that a large number of dogs have never been vaccinated, although rabies vaccination is mandatory, as well as microchipping. Our petition was a success so dogs no longer have to be vaccinated every year, but according to the vaccine manufacturer’s instructions. We called on the competent local and state institutions for urgent systematic control of microchipping and vaccination of all dogs. Read about the legal obligations of dog and cat caregivers in the new leaflet.

The veterinarian says: By castration we prevent animals suffering! 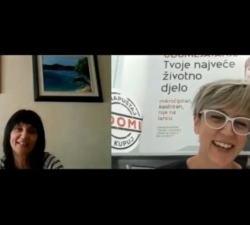 As there are still misconceptions related to the castration of dogs and cats, we published a conversation between journalist Mirna Dvoršćak and veterinary doctor Svjetlana Prodanović. The reason for the conversation are the efforts of animal protection associations, which have been warning for years that the castration of dogs and cats prevents the uncontrolled increase of the animal population, and thus violent ending of their lives and birth of unwanted puppies and kittens.

Bite in October without meat, milk and eggs 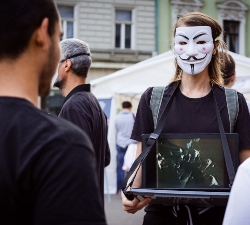 On the occasion of World Vegetarian Day and World Farm Animal Day, which are celebrated on Mahatma Gandhi’s birthday, we set up an information booth to encourage people to think about the ethical, environmental, health and other benefits of a compassionate lifestyle and diet. We invited everyone to join the Vege Challenge and shared vegan recipes. On the same day at 7 pm, activists gathered in the “Cube of Truth”. 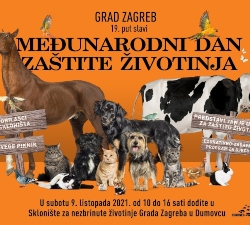 This year, we marked the International Animal Protection Day in a shelter for neglected animals of the City of Zagreb in Dumovec. We invited everyone to spend time with abandoned dogs, animal welfare associations, doing a tour of the shelter and with an abundance of good vegan food at the Vege picnic. We pointed out that animals should be helped by switching to a vegan diet, by stopping wearing leather and fur, buying products that have not been tested on animals, avoiding circuses and zoos, and adopting dogs and cats.

We donated films for the Ethics curriculum

Since the curriculum of the subject Ethics for high school seniors includes the topics of animal rights and veganism, we made and provided two educational short films on these topics to all high schools. Both films are designed to be objective and educational and provide basic information on these topics. The films do not give instructions, but leave a choice, and encourage discussion and interest in further information. The narrator is Petra Bartulović, and the dynamic clips are adapted for school age.