“If you have been brutally broken but still have the courage to be gentle to other living beings, then you’re a badass with a heart of an angel.” – Keanu Reeves, actor

Matija is adjusting to life in Kuterevo

Bear cub Matija was transferred to a sanctuary in Kuterevo a month ago. This bear cub had a rough start to life, losing his mother early on, but experts believe that with the help of experienced staff, problems with his development will be overcome, he will be successfully rehabilitated and will adapt to life in a sanctuary. You can watch the video of little Matija in sanctuary here.

The Ministry of Economy against firecrackers

On July 21st 2019, we guest-starred on central news at Z1 television. We talked about the importance of banning pyrotechnics throughout the year, an initiative supported by four ministries so far – the latest one being the Ministry of Economy, Entrepreneurship and Crafts. Also, we talked about the necessity of putting a stop to animal transport during the Summer months, as well as frequent inspections of associations and shelters for abandoned animals, all the while reports of animal abusers in most cases get dismissed.

Meeting with the Minister of Agriculture 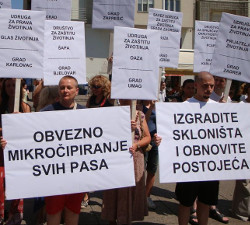 We attended a brief meeting with the new Minister of Agriculture, Marija Vučković, where we discussed problems with abandoned animals. Also, we had a meeting at the City Office for Physical Planning, Construction of the City, Utility Services and Transport where we talked about the importance of implementing the Animal Protection Act. We reiterated the importance of the control of microchipping and animal castration.

Regarding our reports to the competent institutions about the animal sale at markets, we spoke to the media about shocking scenes of animals sold at markets – locked in small cages, at very high temperatures, without the possibility of taking cover from the heat, and no access to water and food. We also witnessed an abandoned puppy on Hrelić. Someone failed to sell him so they just left him there to fend for himself.

In the announcement of the “End the Cage Age” initiative, we emphasized that cages are the cruelest creation man has made, as to put animals under his control. We believe that holding animals in cages is cruel, unnecessary and has no place in Europe. We have called for the signing of a petition to ban cage farming at the EU level, as well as to switch to a vegan diet.

We reacted to the news of a dog that was released on the roof of a building, jumped off it and sustained serious injuries. We emphasized that a prompt response from the competent institutions is necessary in order to sanction the irresponsible behavior of the dog’s owner, thus preventing any such future irresponsibility. Letting a dog go on the roof is a highly irresponsible act that can end in serious injury and death of an animal, as well as injury of the people on the street.

For the twelfth year in a row, the ZeGeVege Festival has been educating the public about the importance of switching to a plant-based diet, which directly saves animals’ lives, prevents massive pollution of the planet, as well as promotes the health and longevity of the organism. At this year’s Festival, everyone will be able to find something of their interest: great food, ethical cosmetics, a wide range of books, interesting workshops and lectures, and fantastic performers!

Our booths are finally in Rijeka!

We invite everyone interested in animal protection, as well as healthy and sustainable living to come and visit our educational booth on August 9th and 10th 2019, from 10am to 8pm at the 128th Croatian Army Brigade Square in Rijeka. Everyone will be able to receive useful information and educational materials. Looking forward to seeing you!

With gratitude and massive greetings,
Your Animal Friends