‘Our video demonstrates how easy it is to make a tasty holiday meal for which no animal has suffered. Animals are, just like us, born with a need for love, warmth, play, and friendship, but instead we take them from their mothers, cut their beaks, tails, and horns, keep them in captivity, humiliate them, violently load them into trucks, and slice their necks in the end. Allow for these holidays to be joyful for animals and for you, so try cooking dishes without using animal ingredients. We wish you a compassionate new year!’ – Anita Petrovic, animal rights activist

Being kinder to animals 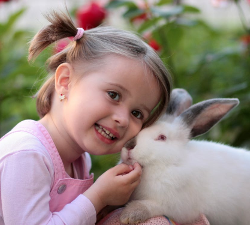 As 2018 has just begun, this is a good moment to plan positive changes we can bring into our own lives as well as the lives of others. Read our proposals for New Year’s resolutions which can help those suffering daily. 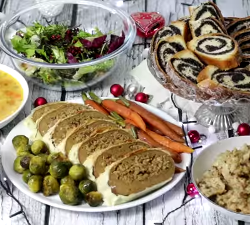 Together with Anita Petrovic from the activist group Vegan Thugz and Mislav Skrepnik from the Facebook community Power of plants (‘Snaga bilja’), we’ve published a series of tasty video recipes! Dishes shown in the video recipe ‘What do vegans eat for christmas?’ include the following: bean soup with stars, seitan roast filled with vegetables, a side dish of caramelized carrots and brussels sprouts, mlinci served with mushroom sauce (mlinci is a traditional Croatian side dish made of thin dried flatbread that’s quickly cooked in boiling water or soup and then shortly baked in grease), and french salad with a poppy seed roll. Who says a tasty holiday feast can’t be free of harm to living beings?

Put a stop to the terror of firecrackers

Yet again, we must remind the community of the necessary ban on pyrotechnics in order to protect animals and children and ensure a safe beginning to the new year. Although the penalties for unauthorised use of pyrotechnics can reach up to 15,000 kuna, we continue to advocate for a full on ban of category F2 and F3 pyrotechnics throughout the entire year and invite everyone to join us in that effort.

With the ratification of the new Animal Protection Act, there is plenty of persistent work on its implementation ahead of us. You can help by donating and paying the annual membership. More information about the ways in which you can contribute is available here.

We wish you all the best for a happy, compassionate and cruelty-free 2018!