“It’s been 4 years since I’ve eaten meat or fish. That’s unusual for a person from Livno. I hope that in the future, our modern treatment of animals will be looked upon the same way we now look back at the treatment of people of other races in the past decades. For instance, meat production is the biggest polluter in the world, it pollutes more than all the cars, ships, trucks, airplanes and motorcycles together. Yet nobody is aware of that. So much water, there are so many harmful things going on, so many harmful substances are being released into the atmosphere due to meat production, that reducing meat consumption would be far more useful than driving an electric car”. – Mate Rimac, Croatian entrepreneur

March for the Animals! 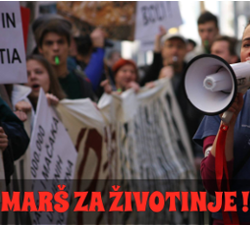 We invite everybody to join us in the March for the Animals! which will take place on Saturday, December 9th , 2017, at 11 o’clock, on the occasion of the International Day of Animal Rights! The meeting place is Tomislav Square in Zagreb. Bring along your family and friends and share this news on your profiles and websites.

A Documentary on the Transport of Animals 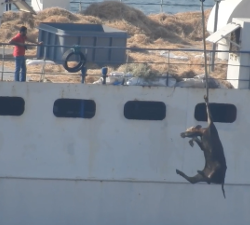 The German television company ZDF released a shocking documentary on the transport of live animals in Europe and beyond, in which footage from Croatia was also presented, providing yet another testimony of the brutal reality of animal transport. The new documentary shows the situation to be worse than ever. Join all those who have chosen not to take part in it and spread the information from the website www.whyveg.com.

Implementation of the Animal Protection Act

Regarding the implementation of the new Animal Protection Act, which entered into force on October 26th this year, we held numerous meetings with representatives of the Croatian Ministry of Agriculture, communal inspectors and representatives of local authorities. 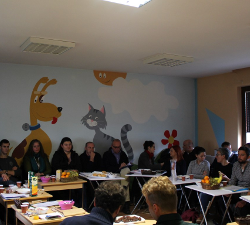 Organised by the Animal Protection Network at the Shelter for Abandoned Animals of the City of Zagreb, the first meeting of the shelters was held, which covered various topics related to shelters, animal adoption programs, and the drafting of the Rulebook on shelters. Representatives from more than 20 shelters were present at the meeting.

In collaboration with the City of Zagreb and the Shelter for Abandoned Animals of the City of Zagreb “Dumovec”, we held the “Adopting is Cool” action, dedicated to the Animal Protection Act and its most important provision – the ban on the killing of animals in shelters.

Monitoring of Microchipping of Dogs underway 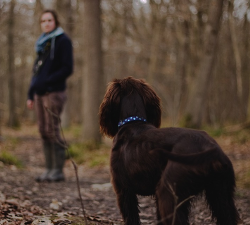 We have contacted all units of local and regional self-government to provide them the most relevant information regarding the new Act and draw their attention to the need for timely implementation, providing necessary financial resources, and considering the prescribed deadlines and misdemeanour provisions. Also, we pointed out the necessity and importance of implementing the microchipping of all dogs and establishing the coordination working groups.

With the new Animal Protection Act entering into force, hard and persistent work to encourage its implementation lies ahead of us. Through donations and payment of the annual membership fee, you can help us to succeed together. Find out here about the ways in which you can contribute.

Thank you,
your Animal Friends Croatia