“When I adopted a shelter dog, I stood by him with my first and last name! Microchipping is the easiest way to finally end dog abandonment. Adoption is not only a choice, but also a responsibility.” – Zvončica Vucković

Rescued chinchillas united with their adopters!

We invite you to take a look at the video and photos of chinchillas rescued from fur farming (a practice banned in Croatia since January 1, 2017) and adopted in Croatian family homes.

The Eurogroup for Animals #StopTheTrucks campaign gathered over a million signatures all over Europe, with a goal of ending the transport of live animals for killing. In collaboration with Animals International, we are offering a more sustainable and effective solution to the issue of transport cruelty. Find out more at WhyVeg.com/gb.

Together to the beach or to the mountains!

In collaboration with the City of Zagreb and the Dumovec Animal Shelter, we carried out our “Adoption Is Cool” campaign, focused on promoting vacations with adopted dogs. We also called for the practice of adopting dogs instead of buying them, and we invited people to help shelter dogs.

Greeting the summer with VeggieFair

As an overture to the upcoming ZeGeVege festival taking place in September, we held the 6th instalment of the VeggieFair, featuring over 15 manufacturers of vegan foods and cruelty-free cosmetics. Croatian theatre director Igor Barberić also gave his support to the fair.

Your choice, your responsibility 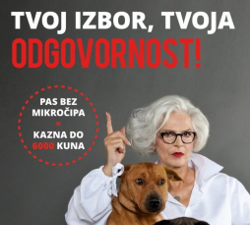 In collaboration with Croatian model Zvončica Vucković and as part of our “Family to the beach, dog to the streets?” campaign, we reminded pet owners that they are legally required to microchip their dogs and that failure to comply with this legal regulation will be punished with a fine of up to 6,000 kunas. On the posters, Zvončica was joined by Abbo and Lady Di, two dogs from the Dumovec Animal Shelter. We also sent letters to all local communities, attaching leaflets with information about the owners’ legal obligations, so that they may be distributed to all the households in that area.

The first reading of the Animal Protection Bill in the Croatian parliament on June 29, 2017 received unanimous support from the MPs. The main reason for such an enthusiastic reaction was the provision banning the killing of shelter animals.

We would like to thank everyone for their much appreciated support, membership, and continual participation in our activities.