On this year’s International Women’s Day, we wanted to make a connection between the struggles for women’s and animal rights. For humans, animals are objects that can be subjugated, abused, and killed just because humans have the power to do so, robbing these creatures of their identity and ignoring their ability to feel pain and suffering. The meat, dairy, and egg industries were founded on the brutal exploitation of the female reproductive system. The road to a just world includes the fight against any form of violence and exploitation.

Plastic bags will no longer be free!

According to the newly amended Packaging Regulations, plastic bags will no longer be free in Croatia from 2019. As a part of the campaign against plastic bags that we began in 2009, in collaboration with Green Action and other NGOs, we welcomed the introduction of plastic bags fees and further appealed to the Ministry to also tax the plastic bags in produce and animal product sections of grocery stores, because all bags have a price. Moreover, we have asked them to set a fixed price for a plastic bags and introduce the ban in 2018.

“The Wild Life of the City” campaign

“Wild animals and humans can and must live in harmony”—this is the message of the campaign “The Wild Life of the City—living in harmony with wild animals,” launched in collaboration with the Zagreb City Shelter for Abandoned Animals in Dumovec and the City of Zagreb. Various species of wild animals live in cities—foxes, weasels, minks, hedgehogs, squirrels, and a large number of birds. All of them need our help and understanding. 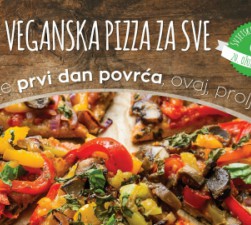 On Meatout, celebrated around the world on the first day of spring, we collaborated with pizzerias and encouraged them to introduce vegan pizza into their menus. We also organized an event in Ban Jelačić Square in Zagreb, where tasty, healthy pizzas, made without animal products, attracted the interest of many hungry visitors. Vegan pizzas are now available in pizzerias in Zagreb, Split, and Osijek.

We have been swamped by e-mails and calls from people appalled by the desperate situation of starved horses on a farm in Oroslavje. We have also received photographs which clearly show the state the horses are in. Judging by the statements of the “owner,” it is obvious that rehoming is the only long-term solution for them.

The first 2017 event of the long-running Adoption is Cool campaign, which is a successful collaboration with the Zagreb City Shelter for Abandoned Animals in Dumovec, took place in Ban Jelačić Square in Zagreb. The theme of this event was living in harmony with wild animals in cities. The goal of the campaign is to encourage people to adopt animals, rather than buying them.

If you want to help animals, people, the environment, and improve your health, visit www.veganopolis.net and try the popular Veggie challenge.

We would be glad if you could support us by volunteering, becoming a member or donating. You help is necessary and appreciated.