In our 15 years of existence, we have organized numerous performances, public actions, and petitions for animal welfare and their rights. We’ve also fought in ways less visible to the public. Because of these numerous and urgent activities, the 15th anniversary of Animal Friends Croatia was quiet (and very busy). We want to take some time and share with you the 15 biggest accomplishments from our first 15 years of existence. Support us by becoming a member, and together, we’ll achieve even more victories!

Voice for the invisible

In a year that began with the ban on fur farming and continued with the announcement of the long-awaited ban on kill shelters, we continue drawing attention to the most vulnerable animals—those invisible to most people. On billboards in Zagreb, you can see a shocking photo of a calf, taken by famous Canadian photographer Jo-Anne McArthur, with the message “for those who cannot speak for themselves”. Devaluing and reducing animals to objects lead to violence, especially in slaughterhouses and on farms. Modern life is full of routine cruelty to animals, but we can demand change through our lifestyles and food choices.
x

Predsjednica In an official statement, president Kolinda Grabar-Kitarović said: “By implementing the decision to abolish the killing of animals in shelters, Croatia will achieve a level of protection of animals appropriate to European standards and pay tribute to all organizations that have been making great efforts for years to implement real and effective protection of animals.” This directly supports the praiseworthy decision of Minister Tolušić, and it’s good news for the six existing no-kill shelters. In the long-term, these shelters have shown that their way of working is more humane and cost-effective. 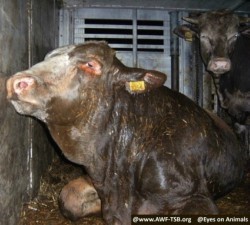 shocking truths about the horrific conditions and cruelty suffered by animals exported from the European Union. United behind the campaign #StopTheTrucks, these organizations joined forces with us and other members of the Eurogroup for Animals in order to submit a request for a ban on the transport of live animals to the European Commission. Sign the petition to stop the transport of animals here, and advise people close to you to change their diet to avoid taking part in this horrific industry.
x

We thank everyone who supported our long-standing campaign against plastic bags by participating in a public hearing proposing to ban free plastic bags. We supported the proposed introduction of a mandatory fee for lightweight bags, but suggested setting down a minimum charge per bag and extending the ban to all plastic bags. We’ve also asked for the immediate enforcement of the ban, which is now scheduled to come into force in 2019.

Anyone who wants to help animals, other people, the environment and their own health should visit www.veganopolis.net and apply for the popular Veggie Challenge.

The start of this year has been as challenging as any. Support our work by volunteering, becoming a member, or donating.

Thank you all for your help through donations of vegan food, office stationery, and other services.