“Pigs down on the kill floor have come up and nuzzled me like a puppy. Two minutes later, I had to kill them – beat them to death with a pipe. I can’t care.” – from an interview clip with a slaughterhouse worker published in Melanie Joy’s book Carnism 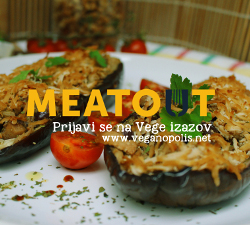 On international Meatout day, we invited our citizens to make a positive change concerning their food habits from our info stall at Zagreb’s Main Square. As encouragement, we gave out veggie starter packs containing our educational materials and a delicious vegan product. Please share and recommend our Veggie Challenge. 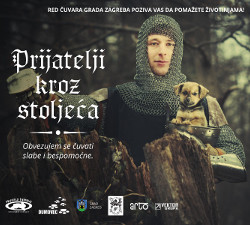 The Dumovec Animal Shelter, in collaboration with us, started a campaign called “Friends Through Centuries”. From the campaign’s billboards, members of the Order of Guardians of the City of Zagreb call for helping animals, just like real knights, whose primary goal was to protect the weak and innocent. The Guardians of the City of Zagreb even organized a march through the city center for the occasion and read their proclamation about the necessity of helping animals. You can view photos from the event as well as the billboard gallery.

Gathering for Chinchillas and Other Animals

Under the motto “A Step Forward, Not Ten Steps Back”, we organized a public gathering to officially file an appeal concerning the Animal Protection Act to Prime Minister Orešković, addressing our plea to stop the violation of the Animal Protection Act and chinchillas. We also used the gathering and the letter to the Prime Minister to warn of other inadequate legislations for animal welfare in Croatia, such as the legally permitted killing of abandoned animals in shelters. You can view photos from the excellently attended gathering, spread the petition for a better Animal Protection Act in Croatia, and check out the list of over a hundred associations that expressed their support for our struggle against fur farming. 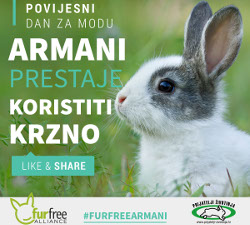 In a public letter we announced the greatly important news from the fashion industry. World-famous fashion brand Armani announced that they would stop using fur in all of their fashion collections! Will Croatia follow the positive world trends?

We proudly announce that we have already started preparing for the 9th annual ZeGeVege Festival, which is, as part of the European Veganmania, one of the three largest vegan festivals in Europe. This year the Festival will be held on September 2 & 3 at the usual place—Zagreb’s Main Square. Once again we expect over 40.000 visitors. Don’t risk missing your stall—apply early. The interest is huge!

Many important battles for animal rights still await us. Please actively support our work and help animals with your memberships, donations, and by volunteering. Be a part of the change. Thank you!