Overview of activities in 2020

In a special issue of AnimaList, we present an annual overview of our activities and achievements in 2020.

This year we have dedicated a lot of time and effort to the campaign to ban firecrackers. We organized a protest in front of the Ministry of the Interior, handed them 60,000 signatures against firecrackers, received numerous supports from other ministries and organizations and experts, participated in public consultations and invited others to join us. We also organized a conference where experts talked about the harmfulness of firecrackers. All these activities and countless letters to the media and politicians paid off because at the end of this year we achieved a complete ban on firecrackers and F2 and F3 categories!

At the beginning of the year, Pig Spasa invited everyone to the Vegan Challenge as part of the Veganuary, which was a great success. Apart from her, the newly designed Veggie challenge was invited by a cute chicken, lamb, cow and pig, who said from billboards placed all over Croatia: “I don’t bark, but I want to live” and invited all people to try the Veggie challenge and show how much they love animals .

We organized the ninth Veggie Fair, which offered visitors a healthy and tempting offer of vegan products. Stella’s sausage was also presented at the Veggie Fair, in the creation of which we also participated. It was a real hit and sold out in record time. 1 kuna from each sausage sold is donated to our association.

As part of the campaign “Let’s respect our sea“, a series of activities were held to educate citizens about respect for our sea and life in it. The cute fish Jadran told people in 3 animated films to “catch compassion“. We explained how the survival of the fish is in our hands and appealed to the shops to stop the practice of selling live fish and crabs. Some of the problems we highlighted are the harrowing scenes of fishing and sea animals dying in the sun on our beaches as well as the trawlers which are one of the main enemies of the sea. Contrary to outdated and unfounded opinion, fish feel pain just as much as humans.

We urged people not to leave the animals because of the coronavirus, but to adopt a dog and a cat from the overcrowded shelters. We reminded that animals also suffer in isolation, all their lives and that we can help them by switching to veganism. We pointed out the connection between obesity and COVID-19 and how a vegan diet can reduce the risk of developing a more severe form of the disease. We also prepared a quiz about veganism to make isolation time a little easier.

Find love at first sight in a shelter

Our longest-running campaign “Family to the sea, and a dog on the street ?!” celebrated her coming of age by publishing billboards. Ingrid Divković and Luka Budak with the slogan “Find love in the shelter first!” they called for the adoption of abandoned animals instead of purchasing. They visited the Shelter for neglected animals of the City of Zagreb in Dumovec and invited everyone to adopt animals and to support the four-legged animals that are still waiting for their forever home.

For the freedom of the bears

Since we managed, with the support of the profession, to ban the keeping of bears in private captivity, we continued to encourage the implementation of this legal provision. Two bears with the help of Four Paws are in the shelter. We asked the veterinary inspection to end the illegal keeping of the remaining bears, but they did not do so, and instead, the violators were legalized, to which we responded and again pointed out that the Veterinary Inspection does not like animals.

This year, we celebrated World Vegan Day by raising 22 vegan flags on the official masts of the city of Zagreb, and two more Zagreb attractions shone in green-blue-white colors – Meštrović’s pavilion and fountains in front of the National and University Library. At Ban Jelačić Square, we shared free vegan cookbooks and organized an online educational and culinary lecture led by Igor Barberić.


To implement the Animal Welfare Act

In order to encourage cities and municipalities to fulfill their legal obligations, in addition to a large number of various activities through the Animal Welfare Network project, we designed and printed an educational brochure on the implementation of the Animal Welfare Act. It was sent to the addresses of all local and regional self-government units, and an online version is available to all interested parties. In the 35-page brochure, we have clearly and concisely listed all the ways in which cities and municipalities can prevent the emergence of abandoned animals. We also informed all LGUs about the importance of the Unified Information Center. 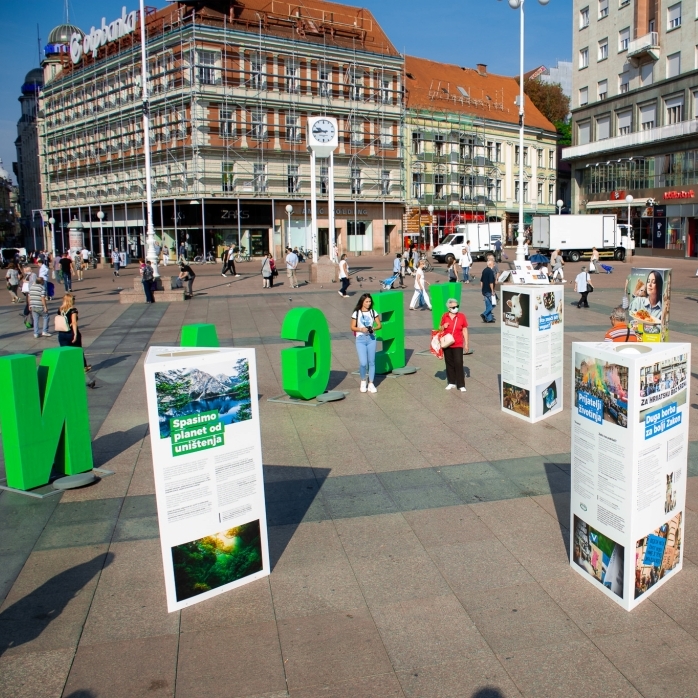 Due to the impossibility of fulfilling anti-epidemic measures, we regretfully had to cancel this year’s ZeGeVege festival and organized the event VegeEDU by ZeGeVege where we prepared a series of interesting and educational lectures and workshops and surprised the public with an attractive installation that included large educational panels and a three-dimensional inscription. . You can watch online lectures and cooking workshops on our YouTube page.

We warned about the connection between Australian fires and animal husbandry for food. On the occasion of the 50th anniversary of Earth Day, we organized an online presentation on the devastating consequences of animal husbandry for food on the health of the planet and humans, led by Nikolina Plenar Jeličić. We also marked World Environment Day, the theme of which was biodiversity. We are reminded that the new UN environmental report shows that about a million species are in danger of extinction, putting most of the blame on intensive industrial animal husbandry.

Performance: Be their voice!

On World Farm Animal Day and on International Animal Protection Day, we pointed out the injustice, suffering and death of billions of animals that people torture, exploit and kill. In an impressive performance, tied with chains and with ribbons over their mouths, we portrayed the helplessness and difficult situation in which animals find themselves daily in the meat, dairy, egg, fur, entertainment, cosmetics, tourism, sports and pet industries.

We have introduced a new campaign “Dogs and cats do not know how to add, but they know how to multiply!” This initiative was supported by well-known cat adopters – Luka Budak, Ivana Kindl and Dora Lipovčan, who are well aware that love for animals includes responsibility. After, they were joined by Slavko Sobin, Neda Parmać Klačar and Ana Gruica Uglešić, whose hearts were forever won by their adopted and neutered dogs.

In addition to the above activities, let us recall a few other events, achievements and initiatives that were important to us, around which we have engaged, and some of them are still relevant:

We were not stopped by the earthquake that damaged our office, the pandemic or other disasters because thanks to the support of our companions, members, volunteers, donors and everyone else we knew that we must not stop fighting for those who cannot fight for themselves.

Thank you all for your support, monitoring and participation in our activities. Be with us this year as well, support us with membership, donation or however you want and can, so that together we can achieve many new successes.